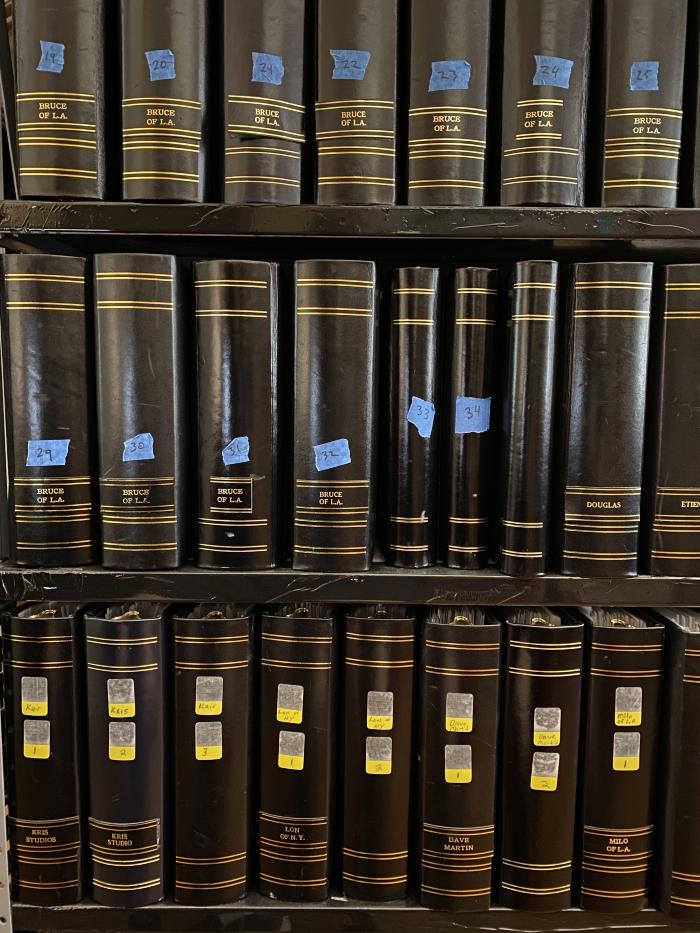 I began collecting physique photography and the ephemera associated with that photography almost 20 years ago.  Initially my collecting was focused on two studios:  Bob Mizer’s Athletic Model Guild and Don Whitman’s Western Photography Guild.  Over the years, however, I have expanded the range of studios to include most other US studios.  My geographic reach has also expanded to cover very many non-US studios, primarily in Europe.

The collection is focused on photographs that date from 1946, just after the Second World War, up to the mid 1970’s.  However, I have a good number of photographs from after that date.  From the early part of the collection through 1967 the photographs tend to be of models who are wearing posing straps, or full swim trunks.  The photographs in this period depict single models in heroic or casual poses, and pairs of models in wrestling or supposed wrestling poses.  Wrestling subject matter was more likely to avoid prosecution for the photographer if the photograph depicted two or more models together.  There are, though, a significant number of photographs from this early period that depict fully nude models.  These photographs would have been taken by the studio of models who were willing to pose nude at the time.  These early period fully nude photographs would have been available for purchase by collectors who actually visited the studio (generally not available through the mail), and they normally would not have been stamped with information identifying the studio, to reduce the risk of possible criminal prosecution.   At the time, it was illegal to send fully nude photographs of male models through the mail.  Several photographers were targeted for raids by police and other law enforcement agencies, had their photographic images and photo negatives confiscated, and were prosecuted.  A good number of the photographers were convicted and imprisoned, a few more than once.  Many collectors also were targeted for raids by law enforcement officers, had their property confiscated and were confiscated.  The professional and personal lives of many, many collectors were destroyed.  In some documented cases the targeted collectors committed suicide.

In the early period (late ‘40s and early ‘50s), the models initially were well-known competitive body building personalities.  By the early 1950’s the models generally shifted to athletic models in their early 20’s who did not have a body building physique.  Some less well-known movie actors posed in the hopes of expanding their brand.  The focus on physically fit, athletic subject matter lasted until well into the 1960’s.  At this point, although many studios remained focused on very fit, athletic models, a good number of the studios shifted their focus to thinner, less muscular models.  Quite naturally, the hair length of the models shifted in the 1960’s to much longer hair length, reflecting the broader cultural change at the time.

In terms of volume, I have approximately 10,000 photos from the Bob Mizer Athletic Model Guild in L.A.  I also have a near complete collection of his Physique Pictorial magazine series that covered most of the period the studio was in operation (up to the time of his death in 1992).  I have most of the other large size magazines he published later in his career, after the models were depicted fully nude.  I have about 8 or 10 of the early 22 by 26 inch story boards representing particular model series that Bob used to market his photographs.  I bought them from John Sonsini who worked for a time with Bob Mizer.

I have well over 5,000 photos from Bruce Bellas’ Bruce of L.A. studio.  I also have a complete set of his Male Figure magazines and other ephemera from that studio.  Bruce Bellas photographed for about 30 years.  After his death in 1974, the heirs to his collection continued to print and sell fully nude photographs that Bruce took prior to his death.  They sold the photographs under the name “Kensington Road”, an address in L.A. where Bruce once had a studio.  The Bruce of L.A. photographs all have a stamp identifying them as Bruce photographs, unless they were of fully nude subjects and taken prior to the 1967 Supreme Court decision.

I have over 4,000 Western Photography Guild photos from Don Whitman of Denver, Colorado.  These photographs were taken either in a studio, or, more often, outdoors, up in the Rocky Mountains.  This dramatic backdrop to the Western Photography Guild photographs sets them apart from the outdoor settings of other studios.   I have also purchased from Andy Dimler, the heir to Don Whitman (his nephew), over 250 of Don Whitman’s story boards….the 11X14 sheets on which Don pasted photo series of individual or dual wrestling models  to market his various photo series.  I have a very thorough collection of the fliers and marketing sheets used by Don to market his photos.  Almost all Don Whitman photographs are stamped.  It does not appear that Don Whitman took photographs of fully nude models prior to the date it was legal to market those photographs.  It is also reported that Don Whitman, unlike many or most other studio photographers, did not make sexual advances to the models photographed.  I have some ephemera that suggests Don Whitman’s reputation as a safe photographer enhanced the quality of his models over the years.  He took photographs of more mainstream body building physiques well beyond the time that other photographers did. It is reported that Don hitman participated in the founding of the Mr. Colorado bodybuilding competition, perhaps with a partial motivation to access athletic models for his photography.

Then there are a host of studios from California……….

I have 24 albums of photos from the US studios listed above, in addition to the single studio larger holdings I noted above.  Each binder holds 150 to 180 photos.  Approximately 4,000 photos in total

I have about 1,000 photos of cartoon images from various studios that provided photographs of cartoon images made by the studio founder.  And there is the separate, well known Tom of Finland photos and magazines.  There are three albums of photos, about 400 in total.  And many of his magazine, including the earlier Kake and Jake and other series.

In non-US studios, I have a good representation of the photographs of John Barrington (approx. 400 photos).  I also have many Scott of London, William Domenique, Graham, and other UK photographers of about 350 photos.  I have Arax of Paris (300 photos), Jean Ferrero (200 photos), Tony Patrioli, some Belgian, German, Czech, Yugoslav and others.  I have many Stan of Sweden, and the other Swedish photographers.  In total, approximately 3,000 non-US photographers.

I then have a magazine collection.  These are largely small format magazines.  I have perhaps 750 to 1,000 of these in total, including Tomorrow’s Man, VIM, American Adonis, Popular Man, Fizeek, etc.  A host of titles.  The magazines date from the 1950’s and 1960’s and, in addition to showing photographs provided by the various studios, provide a strong background of the historical context in which the photographic studios operated.

The collection has grown over the years to provide a very solid representation of the American photographers in this period, with particular emphasis on Athletic Model Guild, Bruce of L.A. and Western Photography Guild.  The American representation is somewhat encyclopedic. It provides a clear view of what was happening in gay oriented physique photography in the second half of the 20th Century.   It also provides a very good representation of non-US physique photography from the mid-20th century period.  A contrast of the subject matter and poses of the American photographs against the European photographs of the time demonstrate very clear differences in tolerance levels in each society.

I have enjoyed collecting the photographs, not only for their beauty as a representation of a physical being, but also for the humor that is often presented, the evidence of a historical progression in style and fashion evidenced in the models and the settings, and, most importantly, the progression in acceptance and tolerance for gay subject matter that surrounds this genre.
LanguageEnglish
RightsAll Right Reserved. Permission to use images must be obtained in advance and in writing from the Bob Mizer Foundation, Inc by writing to info@BobMizer.org